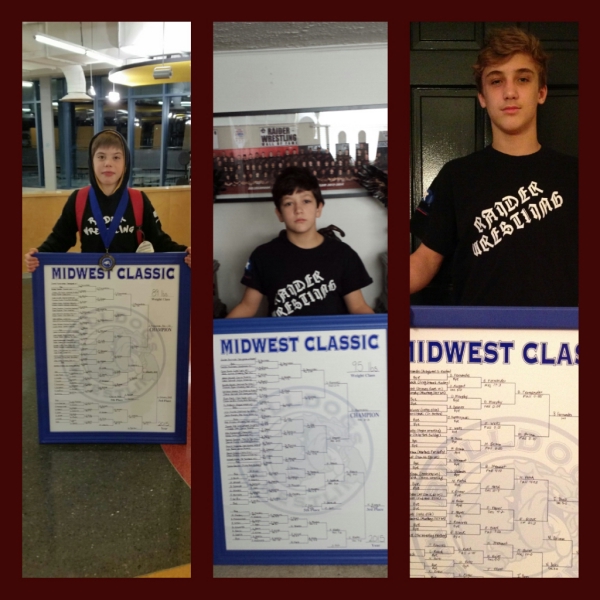 For the 2nd year in a row the Junior Raiders came home with a 2nd place finish at the Midwest Classic Elite Tournament. 21 wrestlers competed at this years event in Tinley Park and 14 of the boys came home with medals, 7 wrestlers made it to the finals and 4 won the individual title. Michael Major lost a decision to one of the countries best youth wrestlers in the 55lb bracket. Conor Smetana lost a close decision in the finals seconds of the 66lb bracket. Anthony Schickel lost a decision to Dean Hamiti of Martinez Elite in the 79lb final. Corey Sapp made it to the finals in the 122lb bracket and lost a close decision to Michael Gunther from the Wrestling Factory. Jimmy Pierandozzi won his 1st Midwest Classic title in the 89lb weight class by pinning his opponent in the finals. Dylan Burnoski beat Connor Gaynor in the 95lb bracket to capture his 1st title. Baylor Fernandes dominated his opponents to capture the 130lb title and winning his second elite title of the year! Ronald Tucker (Hwt) won the tournament before the event started, his opponents figured they had no chance so they chose not to attend! Rounding out the action was Caleb Koldan 3rd place, Jacob Dado 3rd, Ashton Breen 4th, Conor Colbert 4th, Jake Mensik 5th, and Matt Ramos 5th. Great job RAIDERS!