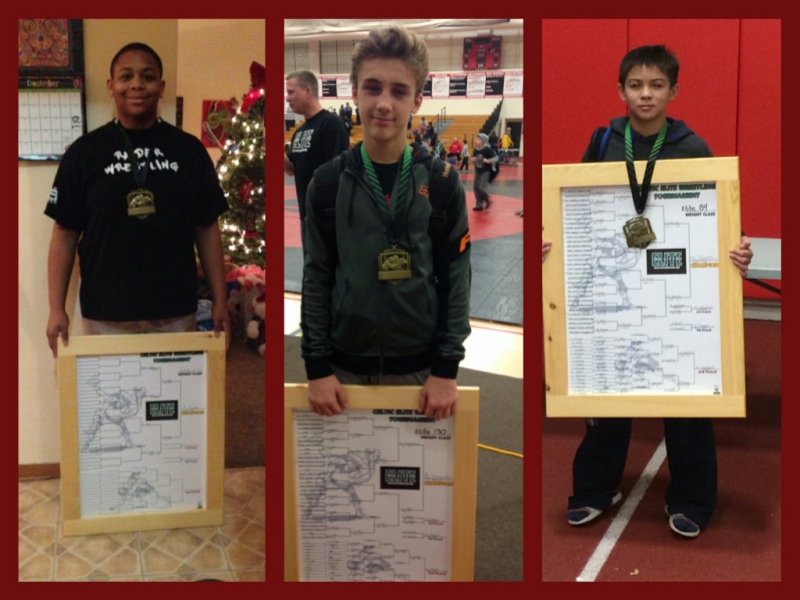 Congratulations to our boys that competed in the Celtic Elite event in New Lenox. The boys did an outstanding job at the toughest of the Elite events in Illinois. 27 of our boys entered this event and 13 of them placed at this event, 5 made it to the finals (most of any club) and 3 of them won the individual title. Matt Ramos beat his long time rival Dyaln Ragusin from IZZY Style 4-3 in a come from behind victory in the last seconds of the match. Baylor Fernandes won his first title in this event in dominating fashion pinning Joshua Otto from Wisconsin in the finals. Finally Ronald Tucker won his second consecutive title by pinning both opponents and winning the Heavyweight division. Jimmy Pierandozzi and Dylan Burnoski lost in the finals but both boys had a great tournament in very loaded brackets. Rounding out the action was Conor Smetana took 3rd place, Jimmy Lalezas placed 3rd in the Midget Division, Jacob Dado placed 4th, Alex Villar also placed 4th in the 84lb division, Javen Estrada and Corey Sapp both placed 5th, Anthony Schickel and Luke Liberatore placed 6th at this years event! As a team we placed in the top 2 for the 3rd year in a row, we definitely opened some eyes and proved to be a solid contender this season!